Along the Milford Road, Kea sightings have increased a heap over the last few years. We drive this road with guests every day during summer – it’s the only overland route in to Milford Sound, so have really enjoyed seeing this increase first hand.

An alpine bird, the Milford Road travels through a main mountain divide, so it’s natural that these parrots are found in this location. Cheeky, colourful and fiercely intelligent, Kea are the world’s only alpine parrot and are found in mountainous areas of New Zealand’s South Island. In honour of National Conservation Week, we thought we’d let you in on a few reasons why we love these birds so much…

At Trips & Tramps we have to replace the rubber seals annually on all our vehicles because of the Kea’s penchant for soft, squishy things to chew on and play with. Because destroying vehicles is not a particularly positive thing for their digestive systems, it’s best to detour them if you see Kea landing on cars and getting stuck in, even though it is very funny to watch. They tend to focus on anything rubber or shiny, so watch out for your aerial too!

2. They’re not afraid of anything

Keas have a taste for any kind of food. Once, they managed to score a box of scorched almonds that we had left secured in a hut. They decided that the chocolate bit around the outside was way tastier than the nutritious almonds themselves, so on return to the shelter all that remained was the box and bare almonds scattered about! They show a strong determination and intelligence when it comes to getting food – stealing from vehicles and bags is not beyond their capability, so be extra vigilant. The leaves, berries, nectar and insects they eat in the wild are far more nutritious for these birds than human food, so please don’t feed them.

3. They make us laugh all the time

We take care of the mail run in and out of Milford, and one day a kea did the unthinkable. At the Chasm (a walk on the Milford side of the tunnel), Steve witnessed a kea hop in to the side of the bus which had it’s side hatch open and was full of mail and packages. It then pinched the package labeled ‘Urgent, Important and Confidential’ and flew off into the depths of Fiordland National Park with it. Unfortunately, that ‘Urgent, Important and Confidential’ package was a passport of a Milford staff member who had just had it renewed for his holiday that week. The poor guy had to report to his embassy that a kea had stolen his passport, and he needed an urgent replacement! We’re not sure if he ever did make that international flight…

4. The Kea bird is the world’s only alpine parrot

Native to New Zealand, keas are a protected species and the only alpine parrots in the world – they’re such a special asset for New Zealand. Stoats and possums eat baby kea chicks, and various local conservation groups are working hard to protect the birds. We monitor around 100 stoat traps along the Milford Road and Milford Delta area, which is why we get so excited when we see kea numbers gradually increasing. It’s heartening to see conservation work making a difference.

Raucous cries of ‘keaaaaaaa’ give way to these birds flying overhead or making their presence known. If you’re lucky enough to see a kea in flight, you’ll notice their yellow, black, orange, red and blue wing feathers when they spread their wings. When not in flight, you’ll generally be able to see only rich olive plumage. We think they’re one of the most impressive birds in Fiordland. 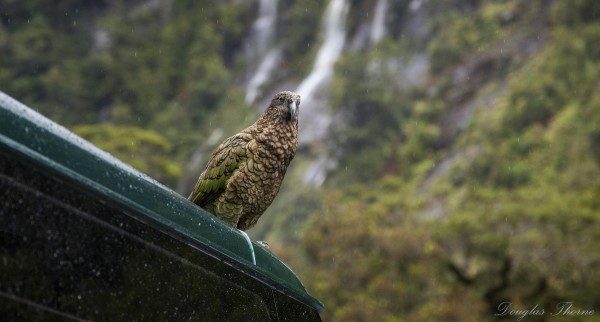 See Kea for yourself

Seeing kea in the wild when you’re visiting New Zealand is a pretty special experience. Our Milford Sound Coach, Cruise and Walk experience offers the highest chance of seeing this intelligent, cheeky bird – we drive the Milford Road from Te Anau twice in one day, journeying to Milford Sound and back again. En route, we make plenty of stops for short walks in the rainforest. Keas love the Milford Road and, on this tour, you’ve got a good chance of seeing them.

Learn more about our Milford Sound Coach, Cruise and Walk experience, or get in touch here.

A Local’s Guide to the Ultimate Milford Sound Itinerary

Bringing the birds back on our Milford Sound guided walks